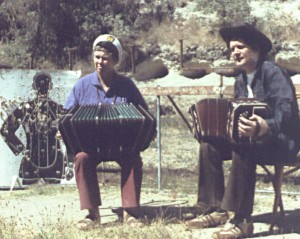 Among the free-reed instruments, the bandoneon takes a special place. A closer relation to the concertina than the accordion, it features an impressively extendable bellows, distinctively voiced reeds, and a non-standardized keyboarding (buttoning) pattern, with an enormous range of possibilites about how tones are divided between the left and right sides and then arranged for each hand and whether the same tone plays when the bellows open or close or, usually, different tones play.  Traditionally the products of small workshops, each bandoneon encountered stands a good chance of being a unicum in one or more aspects of its design. Associated most popularly with the Argentine tango ensemble (and also heard tango-ing in Kurt Weill’s original Dreigroschenoper orchestration), it has also had a special role in experimental music. Encouraged perhaps by composer and keyboardist David Tudor’s enthusiasm for the instrument — which features most prominently in Tudor’s electronical expanded work Bandoneon! — two of Tudor’s closest colleagues, Pauline Oliveros and Gordon Mumma, also became exponents of the instrument as composer-performers. The Material Press catalog now includes two works of Mumma’s featuring the bandoneon — the duo SOFT SALOON SONG and the septet EQUALE: ZERO CROSSING — as well as the co-composition by Oliveros and Mumma for two bandoneons, LAMENT FOR A PRINCESS ENCHANTED TO DEATH from their collaborative music theatre work FWYYNGHN (1980, pronounced „finny“, to a text by Beatrice Manley.) The edgy but warmly baritonal reed voicings and the long-winded bellows of the bandeon shine in these gems, particularly in some passages of exquisite voice leading.